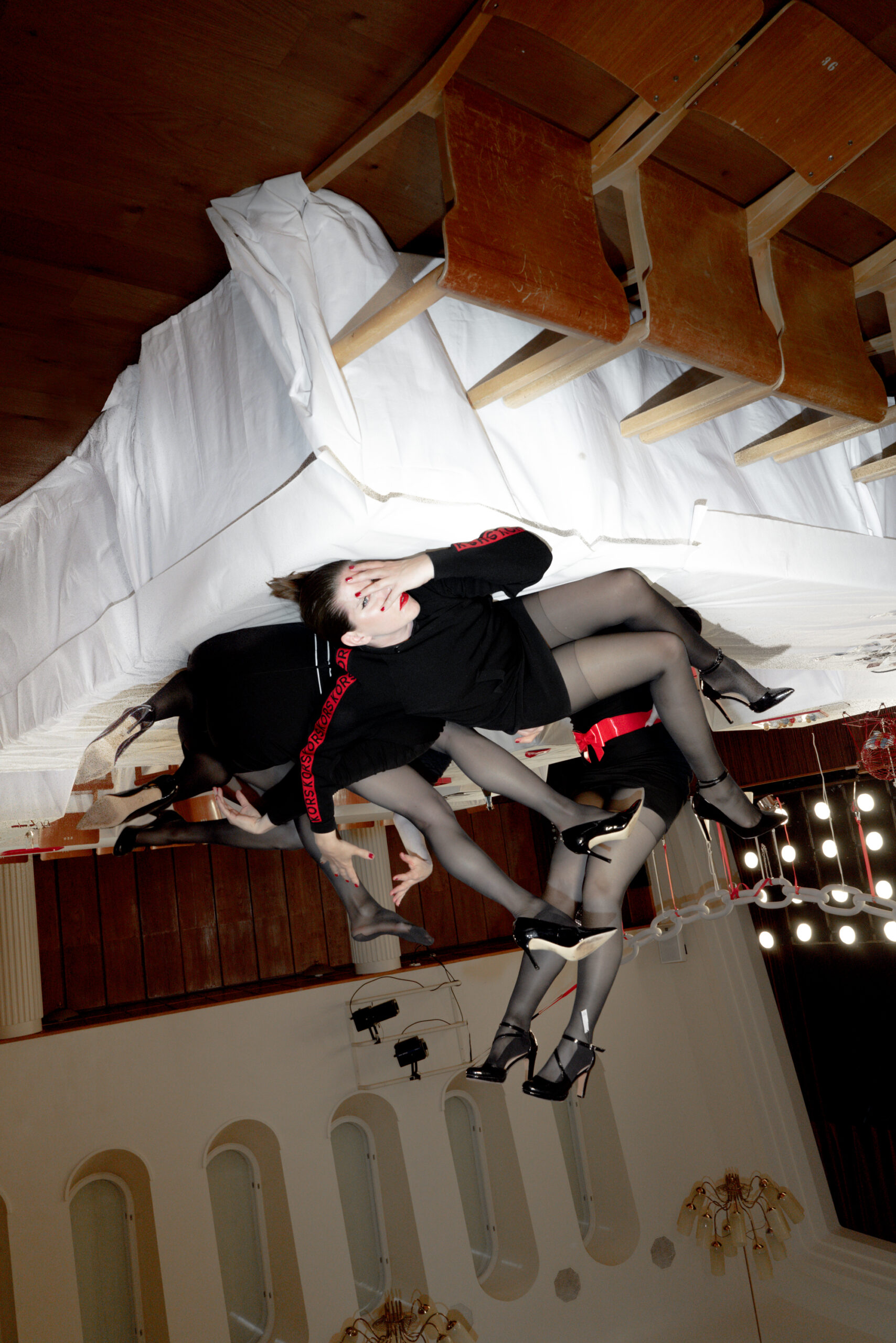 WHAT: In 2001, the newly formed drag king group, SUBFRAU, was invited to the drag king festival GO DRAG in Berlin. Full of anticipation, we set off with a show that was mostly in our heads and a title we loved: This is Not My Body. We would deconstruct the female body, into the skin, down to the bones, it would be dismantled. That we knew. We rehearsed evenings and nights in someone’s living room on Oranienburger Strasse, where we also slept and partied. The performance was received with standing ovations and the world was open to Subfrau.

Times have changed; the world, us, our bodies, our perspectives. We are established now and yet nothing is finished. Now we think: This is not my money. We will deconstruct money, into the skin, down to the bones, it will be dismantled. That we know.

Subfrau’s comeback invites a shaky, wobbly, and insane charity event. Feeling guilty that we have been granted privileges on loose grounds, and with that privilege we have destroyed the environment, we invite you to a place where money and goods circulate. Money and things are given away to someone who needs them more than us, or maybe just to the one who pays the most? Instead of buying tickets, we ask the audience to bring something they own and are willing to sell to us. The items the audience brings create the performance itself: through the audiences’ items, we discuss ownership, gifts, charity, capitalism, and memories – and who we are without the endless amounts of stuff we surround ourselves with.

TICKETS: Please note that the ticket for the show is an item that you are willing to give away. We ask you to bring the item when you come to the show.

subfrau was created by eight women graduating from Helsinki Theatre Academy in 2001. All the female students shared an anger and frustration toward the education system that was hierarchic and hostile towards women. After the 3-week-long drag king -workshop in Theatre Academy with the artist Diane Torr (US), we gained back our faith in performance art and in ourselves. Within the workshop, we created male alter egos which performed on various stages in Helsinki. In 2001 we started Subfrau as a direct extension of Torr’s workshop. Since then Subfrau has made seven performances with focus on gender, the construction of it, and on power; always from an investigating perspective. Subfrau has toured with its work throughout Nordic countries (incl. Greenland and the Faroe Islands) and Subfrau still has a cult reputation in the Nordic countries. A testimony of Subfrau’s significance can be found as a mention in Tiina Rosenborg’s book “Ilska, hopp och solidaritet: Med feministisk scenkonst i framtiden”. In 2011, Subfrau made its last performance and from then on the group has taken a pause. In 2022 Subfrau will make a comeback where 5 out of 8 original members will participate.

Lisen Rosell is a stage artist who works on both her own projects and in collective processes with other artists. In her work, she integrates feminist methods, humor, and class awareness. Rosell is interested in what is considered “bad culture” and the tension between the accepted and the inappropriate. She is crazy about nuances in conversation and speech, and the form and content of spontaneous dialogue in a performative context. She strives to develop methods for broadening the concept of theater, for audience meetings, and for stage expression. Lisen is a member of the ÖFA-collective and has been a co-creator on most of the collective´s performances since its start in 2006. In recent years, Lisen has been a co-creator of Harlequin at Hangö Teaterträff, Grottbjörnens folk at Turteatern, Cuteness Overload at Kulturhuset stadsteatern Fri scen, Tipspromenaden – Konsthall C , What happens in Uppsala stays in Uppsala at Uppsala stadseater, ÖFA: Monster at ZebraDans. As a freelance actress, she has worked in places such as Unga Klara, Unga Tur, Teater Tre, Stockholm City Theater Skärholmen, Teater Halland. Link to ÖFA here